Located on Skovveien in Frogner is Bokbacka – a new restaurant in Oslo with Michelin star potential. The place opened without much fuzz this autumn. At least, I didn’t read anything about it until I saw some pictures from the opening night. Admittedly, I was skeptical at first when I saw photos of “the tree” – a concept Bokbacka appeared to have copied from other restaurants like El Cellar de Can Roca in Spain. Then again, copying is a common source of innovation and who am I to say where they got the inspiration from? Both Noma and Alchemist in Copenhagen serve varieties of this idea too. The more I read about Bobacka, the more I understood I had to check it out.

Note: This restaurant has closed permanently. 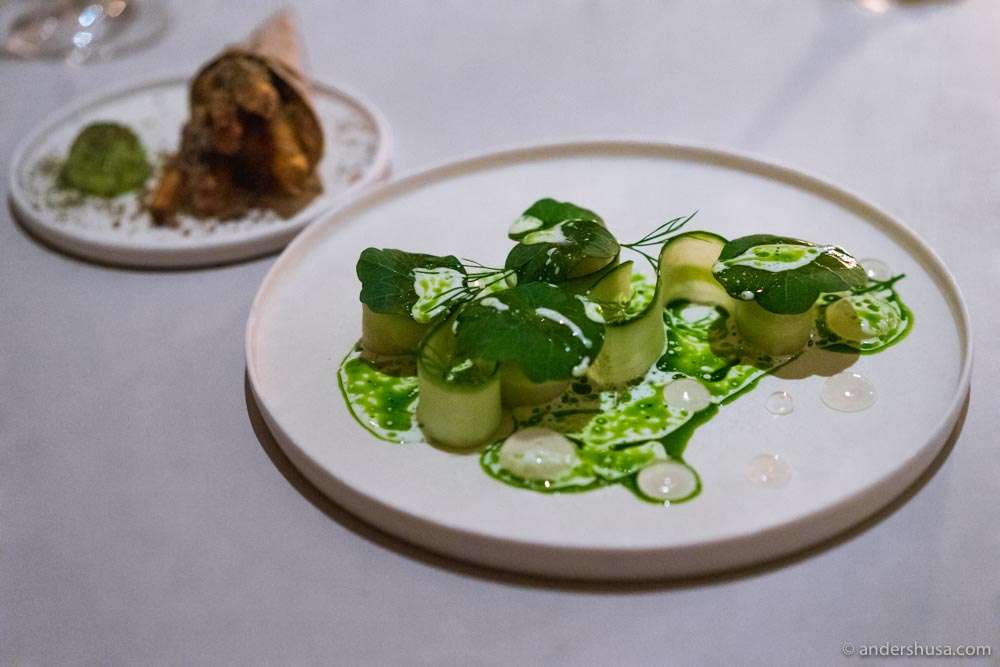 Swedish Simon Weinberg, with experience from several Michelin-starred restaurants like Noma and Bagatelle, is the head chef at Bokbacka. I still remember his famous mini burger at Bagatelle’s sister restaurant Lille B. Danish Alexander Jones is the restaurant manager and head sommelier. Bokbacka describes themselves as a Nordic izakaya. Izakaya is Japanese and means an informal place to drink and dine. This isn’t the kind of place I would risk just dropping by, but the style is certainly Nordic here! Local, organic ingredients like Norwegian octopus, brown crab and langoustine, and in-season produce such as duck, Jerusalem artichoke, and pumpkin. In fact, no place in Oslo has ever made me feel so much that I am in Copenhagen. The atmosphere in the room, the service from Jones, and the general vibe of the place took me straight back to my favorite city in Scandinavia. Maybe my mind was tricked by the fact that Alexander is Danish… In either case, I loved it.

I did not get a photo of the first snack, which I believe was a warm broth of pork knuckle. We were offered an apéritif, which we accepted, and got recommended the sparkling wine Ridgeview from Sussex, England. An excellent choice, which I was previously served at restaurant Tango in Stavanger. The menu lay in front of us on the table in a small envelope – a six-course omakase menu, with the option of three extra dishes. Omakase roughly translates to “trust the chef”, but all the dishes were written on the card. In either case, we ordered the full menu (NOK 775) with two of the extra dishes, and the drink pairings (NOK 795). In the end, our sommelier and host of the night, Alexander Jones, treated us with the third bonus serving as well to complete the menu.

I like that a lot of the action happens tableside. Sauces are poured onto your plate, there is a 200°C warm rock of Himalaya salt used to cook a langoustine, and a lot of stuff happening in general. As a guest, you get a better insight of how your food is prepared and a bonus show. To further enhance your dining experience, Bokbacka has built a coffee shop within the restaurant. Once the desserts are consumed you are invited to follow your waiter to the inner-most room of the venue. Here they have set up couches and small coffee tables, and there’s a small counter with an espresso machine. We asked for a hand-brewed Kalita. Jones sat down next to us at the table and prepared it. Once again, a very personal experience!

The art on the wall and most of the plates are from the ceramics artist Anne Udnes, who also supplies Maaemo, Ylajali, and two other Michelin restaurants. Bokbacka is a good example of Nordic restaurants being so much more than just a place you eat. They are becoming art exhibitions with Scandinavian architecture, furniture, woodwork, paintings, and ceramics. Of course, in addition to the artful plating of the food, and the spectacular serving at the table by chefs and waiters.

The launch of the Michelin guide this year was a joke for the Nordic countries, especially for Norway and Finland. No new stars were awarded to either country. In fact, with Ylajali closing now, we are losing a star. Hopefully, 2016 will bring new cities and new restaurants to the guide. In the meantime, the White Guide delivers much better recommendations. Bokbacka didn’t make it into the White guide this year, but only because they opened too late I think. If I were to name the top Michelin star candidates in Oslo, I would say Bokbacka and Kontrast are the two most likely.

Which are your top picks for Michelin stars in Oslo?