Substans had been on my wishlist for a long time, when the opportunity finally came for me to visit this one-Michelin-starred restaurant in Aarhus. Created by the couple Louise and René Mammen, with the latter leading the kitchen together with Nicolas Jørgensen as the creative head chef. Jørgensen is also the current captain of the culinary team of Denmark. What made Substans so attractive to visit was not only their star and the many recommendations, but also the strikingly beautiful photos posted to Instagram every day by both René and Nicolas. I highly recommend following them both and see for yourself.
Looking for more great spots for food and drinks in Aarhus? Check out our city map of Aarhus!

Entering the venue of Substans in Frederiksgade 74 in Aarhus, I quickly realized why their photos are so compelling. The interior design makes for a superb photo studio! Huge windows to let natural sunlight in, white-painted brick walls to reflect even more light, and gigantic wooden tables with rough carvings and pattern to give a nice contrast. A monkey drinking wine on the wall, flower, and candles in ceramic vases … as you can imagine, me and my romantic buddy Lars Spiser could hardly stop shooting photos.

The Natural Flavors of the Produce

Obviously, it’s the food at Substans that truly makes it my favorite restaurant in Aarhus. First things first – bread. Crispy crust, while light and gooey on the inside. Memories of the best bread serving I had at Kadeau in Copenhagen, but lacking ever so slightly the crunch to match it 100%. Two small snacks next: peeled tomatoes with lavender and chamomile, and salt baked onions with blackcurrant shoots and spruce vinegar. Sweetness and acidity! Such a powerful demonstration of the New Nordic kitchen’s ability to just lift the natural flavors of great ingredients.

Tart of the sea. A starter that fucks with your mind. You expect something sweet like a dessert, but it tastes like the ocean! That’s the mussel cream, of course, in a malt pie otherwise filled with pickled vegetables and drizzled with dried and smoked cheese, before it’s topped with rock samphire.

… a sauce on fried mushrooms and pigs’ legs

Substans has been awarded the organic gold mark, meaning that 90-100% of their produce are certified organic. That’s quite the achievement! With that in mind, it shouldn’t come as a surprise that the main course was organic pork. Marinated in øllebrød and caramelized on the grill to give you that irresistible flavor combination of smoke and fat, together with salt, sweet and umami tastes. I’ve had pork this good before, but that was at other top restaurants like Daniel Berlin in Skåne and Kadeau in Copenhagen. This one made it to my top 25 best dishes of 2016!

You talkin’ to me?

Make Way for the Kids!

As for the wine philosophy, Mammen and Jørgensen focus on organic and biodynamic wines from small producers, much in line with the natural wine trend that is quite evident in Aarhus. We had a few delicious glasses during this lunch, but our time was limited since the next guests waiting outside were way more important – kids! Smagens time is a concept developed by famous Danish restaurateur Claus Meyer, where it’s forbidden for adults to take part. This year was the sixth in the running, 87 restaurants in Denmark took part and served more than 4000 children.

A Short and Sweet Goodbye

However, before we were kicked out to make room for the youngsters, we had time for a dessert. Such a light and delicious ending. A rosemary ice cream with a poached plum, marinated gooseberries, and crushed shortbread. I’m a sucker for ice cream, especially when they come as soft and creamy as this one. The plate resembled another sweet finish I enjoyed at Nabo – the little sister bistro of restaurant Kadeau. That’s the third comparison I make to the cooking of the Kadeau guys, but don’t be mistaken – Substans definitely has its own signature. Damn it, I want to go back soon! 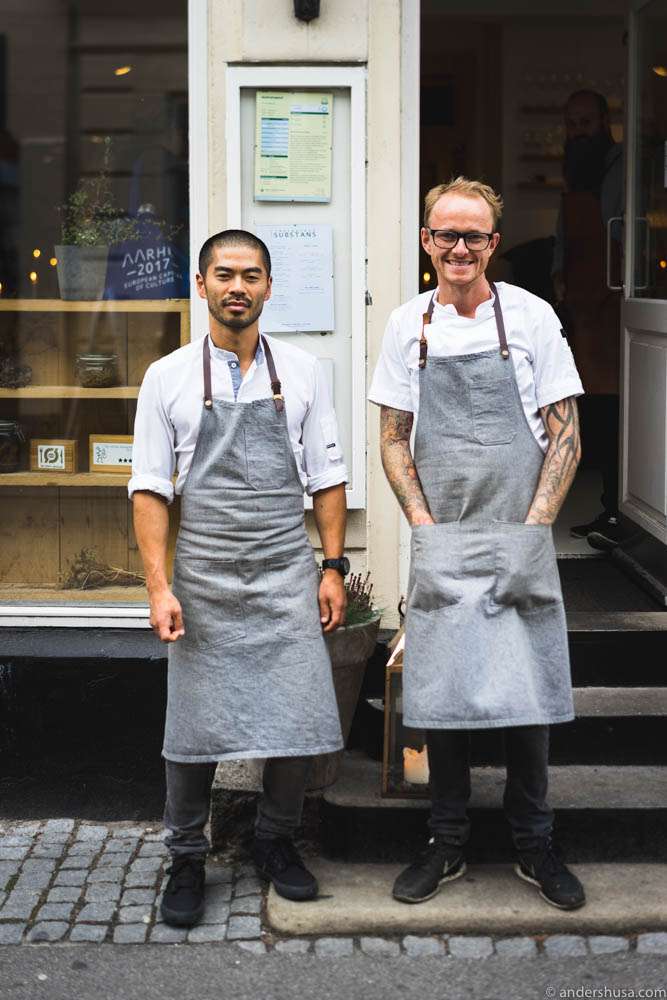 What’s your favorite restaurant in Aarhus? Please leave a comment below.

This was part of a sponsored trip with Visit Denmark. The sponsor had no influence on the content of this article. I received no monetary payment.