Koie Ramen opened in late September as Oslo’s first real ramen shop with housemade noodles. While I have been busy traveling from August till October this year, Oslo has exploded with new restaurants. If you keep an eye on my restaurant rumors, you’ll know what I’m talking about. There are at least ten new spots I want to try out, but have no fear, I’m working my way through them one by one. Koie Ramen was high up on my priority list. I love a good Japanese noodle soup. It’s one of the things I can really get a craving for. Koie Ramen is the kind of place you can drop by pretty much at any time. In fact, they don’t even accept bookings – only walk-ins.

Technically, Koie Ramen isn’t the first ramen shop in Oslo. As I mentioned in my recent article on the ramen wave that is about to his Oslo, Sapporo Ramen at Mathallen has already been in business for more than a year. I wasn’t particularly satisfied with my meal there, though. Neither with the taste of the broth nor with the texture of the noodles (but I promise I will return soon and give them another chance). I can’t help but dislike the atmosphere as well, sitting in front of an industrial facade, located within a mini-mall. Koie Ramen, on the other hand, is situated at street level on Osterhaus gate 13 (a cross street of Torggata), with an all-wood interior, and feels much more like a real Japanese ramen shop. However, the main reason why I think it’s Oslo’s first real ramen restaurant is that they make their own noodles. That makes it all the more authentic.

People feel very strongly about ramen. Obviously, the broth and the noodles, but also the meat, and even the egg – all have to be just right. There’s only one thing that is for sure: people will both love and hate Koie Ramen. Personally, I liked it, and I find that the team has done some major improvements since their pop-up-days at Teaterkjeller’n when it was still called Tanpopo Oslo Ramen. I’m not saying it’s perfect now, but the people working here are dedicated and passionate about what they do and they cook everything from scratch. While that is important, it also has to taste good. Luckily, Koie Ramen delivers on that point as well.

We checked out Koie Ramen on a busy Friday night. Because of the casual look of the dining room, my first instinct was to order at the bar. However, it turned out they actually do table service. It was one hour before closing time, and we ordered most items on the menu. That included three different ramen soups to share (tonkotsu, shoyu, and miso), the Karaage chicken, and one plate of the gyoza. Paired with a large Kirin beer each (50cl), the bill ended at NOK 1000 including tips. That’s NOK 333 per person, which isn’t super cheap, but definitely as expected in Norway.

Gyozas are steamed dumplings that are pan-fried on one side. The pork gyozas we had at Koie were juicy inside, with a good flavor from the meat, a delicate texture to the dough, and a sweet-acidic sauce on the side to dip in. Koie Ramen is one of only three places in Oslo, that I know of, that makes chicken Karaage. Pjoltergeist and Bass are the other two. (Do you know anymore? Please, let me know in a comment below.) This version was the most crispy of them all, with the chicken still juicy inside. You squeeze some lemon juice over the chicken and dip each piece in a delicious mayonnaise. I suspect it might have been the classic Japanese Kewpie mayo, or an attempt to replicate that, which is sweeter than the European version. Anyway, the Karaage is crunchy, salty, fatty, sweet, and everything good at once. 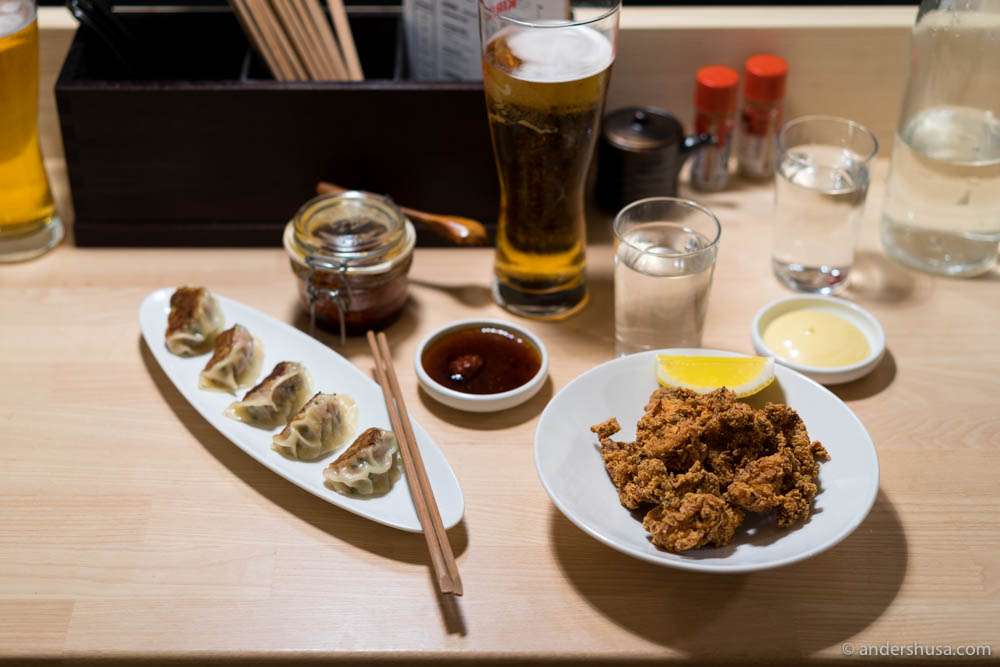 Let’s Get Down to Ramen Business

We tried the miso ( with a base of fermented bean paste) ramen which turned out to be a vegetarian option with mushrooms, the classic shoyu (soy-based) with pork neck, and the tonkotsu (pork bone broth) that comes with fatty pork belly. The only ramen we didn’t try was the shio (salt-based).

I had been warned in advance by a friend about the tonkotsu broth being too fatty, but I had to try it anyway. The flavor was really good, but I agree that it was indeed very rich – something that could easily have been balanced off with some more acidic vegetables or other elements. Unfortunately, the pork belly had been charred just a bit too much, which also left a somewhat unpleasant aftertaste of charcoal (instead of the softer, caramelized flavors of a Maillard reaction). And since I am nitpicking, I should also mention that the meat slices were a bit on the thick side. I find it more elegant, and certainly easier to eat with sticks, when the meat is cut finer. As the rules of ramen go, the noodles in the tonkotsu were thinner than in the other broths so that the oily soup sticks better.

The bowl of Shoyu ramen had a salty, lighter, and more clear broth. The noodles were thicker, and more to my personal liking. However, the miso ramen turned out to be my favorite of all three. It was creamy, but not too fatty, with a nice spiciness to it, and also with the thicker noodles. Delicious mushrooms made me forget all about the meat that was left out. All three bowls were topped with a marinated egg, slices of scallion, corn (except in the shoyu), and menma (fermented bamboo shoots). Koie Ramen is a new favorite in town that I fear I will return to just a bit too often.

The People Behind Koie Ramen

Restaurateur Ann Sung-an Lee (Mission Taco, Gressholmen Kro) together with the head chef Tim Homer are the people behind Koie Ramen. The word Koie means “come home” in Japanese. A clear signal that they aim to make it authentic.

– When we met, we realized we had the same vision. We both wanted a place that nods to traditional Japanese ramen, Ann told me.

They make their own noodles using a Yamato noodle machine. Mr. Kaoru Fuji, the President of Yamato and a trainer of legendary ramen chef Ivan Orkin in New York, has even been to Oslo to approve of the quality. Next time, I’m gonna ask to see the noodle machine!

Want to learn more about ramen? Check out the Serious Eats Guide to Ramen Styles.