San Sebastián has a new Michelin star! The predictions were true. In September this year, we visited restaurant Amelia, which was rumored to be one of the hottest new eateries in town. Chef Paulo Airaudo is of Italian descent and used to run a successful one Michelin-starred trattoria in Geneva in Switzerland called La Bottega. Thus, the world of fine dining was far from new to him when he decided to leave his first star behind to open his very own dream place in the Basque culinary capital of Donostia-San Sebastián. Today, he was rewarded with one Michelin star just seven months after opening.

A Long Time Ago in a Galaxy Far, Far Away …

Restaurant Amelia is a modern fine dining restaurant with 28 seats, located in a quiet part of San Sebastián, near the El Buen Pastor Cathedral (beautiful, by the way, don’t miss it). What does modern mean in this case? Well, at Amelia they serve a tasting menu, focused on seasonal, sustainable, top quality produce, from small producers – and it’s all paired with natural wines! Sounds familiar? Fear not, Airaudo knows how to give it a signature of his own.

Personal style is a keyword for the food, wine, and even the interior of the restaurant. It shouldn’t take you long to discover that Paulo is a huge Star Wars fan. The face of Darth Vader meets you at the reception counter, a full-scale lightsaber hangs on the wall, paintings of the dark lord and his stormtroopers decorates the wall. At the end of the meal, you even get a stormtrooper-shaped chocolate petit-four (similar to The End at Geranium, which varies between a skull and a stormtrooper).

Lightsaber on the wall

There are two ways to dine in San Sebastián. You either visit one of the area’s many Michelin-starred restaurants or you snack your way from pintxos bar to pintxos bar like the locals do. This evening, we felt like a bit of both worlds and started early in the evening with some nibbles and zuritos (local name for a small beer). When we arrived at Amelia, later on, we were still in the pintxos mindset and asked for a glass of txakoli as an aperitif. Txakoli is a locally-produced, gently sparkling wine. Very light and refreshing. I love it. What’s great about the cellar at Amelia is that they’ll serve almost any wine by the glass. I suspect due to a Coravin.

A drink you always have to decide upon in a restaurant setting is water. I prefer sparkling water (which weirdly enough is an acquired taste for most), but Hedda likes still water, so we always ask for different ones. In this case, we got one big bottle of water each – San Pellegrino and Acqua Panna respectively. At restaurant Amelia, they put the bottles on the table, so you can help yourself when needed. Just because they’re aiming for the stars, doesn’t mean they have to feed you with a spoon. Initially, our plan was to stick with water (after the txakoli) throughout this meal, but the sommelier soon managed to convince us differently. Perhaps due to a large selection of natural wines.

An acidic and edgy starter of black garlic, onions, and pickles woke us up at the start of the meal, and was followed up by a summer langoustine in tomato essence with beach herbs. As a Norwegian, I am spoiled with humongous langoustines, so the size of this one did not impress me. The dish was good, though! The bread serving, however, was one of the best this year. A wonderful sourdough bread, with a thick, crispy crust, came with three different spreads: butter, chicken liver paté, and my favorite; olive oil. The latter must have been stirred with agar powder or something similar, because the consistency was like a gel. Very interesting texture and it even lifted the taste.

The top dish at restaurant Amelia this evening was a plate with scallops and Rossini caviar, with vanilla oil and sea herbs. Top quality products and a magical combination of vanilla and sea herbs were enough to make a winning dish. All the remaining savory courses were delicious, and much in line with what you should expect from a one-Michelin-starred restaurant. With chicken wings, crispy chicken skin, and a heavenly reduced sauce of chicken stock being the most standout dish among the main courses. A dessert of lemon curd, meringue, crème fraîche, and dill was right up my alley and triumphs in the sweet section. Finally, a perfectly caramelized, sticky, warm canelés to go with the coffee, and I was sold.

Congratulations to chef Paulo Airaudo and his team. Well deserved!

Because, Champagne goes with anything … 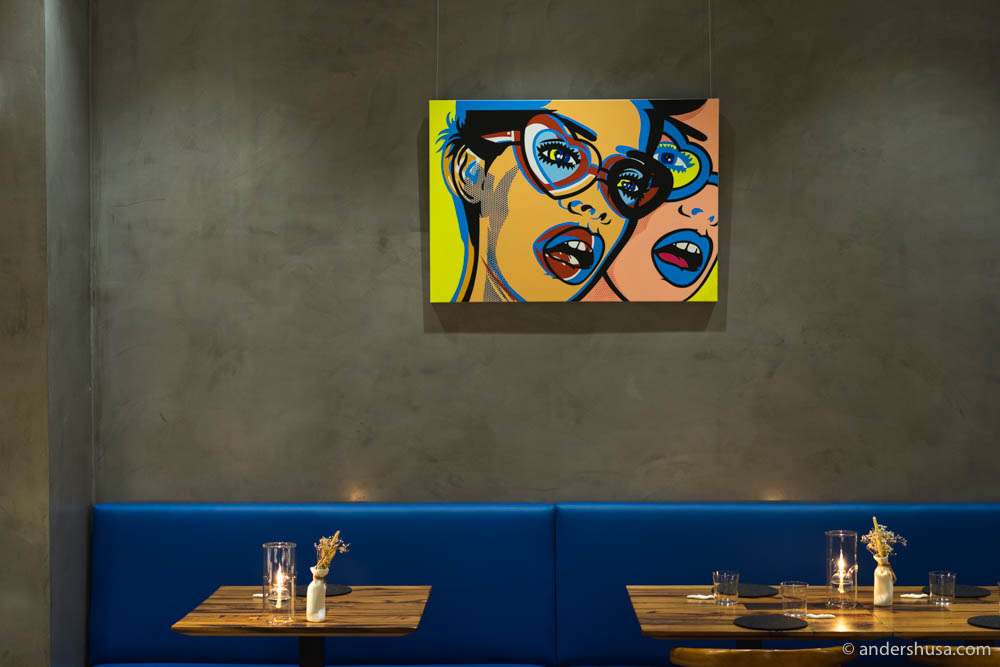 What’s your favorite restaurant in the San Sebastián area? Please share your recommendations in the comments below.