If you follow @carnivorr and @andershusa on Instagram, you probably know that we prefer natural wines. We like the funky stuff – the vibrant juices, succulent, tropical, and cloudy. Often with funny labels, always organic, usually biodynamic, and high quality. We don’t mind some skin contact, or orange wines if you will, but we also love red, rosé, and white. Some of our favorite wine producers in the world are from Austria. At restaurants, we often find ourselves skipping forward to the Austrian section of the wine list to see if we can spot any familiar names. It’s our safe zone. This fall, we had a chance to visit some of the biggest legends in the field – winemakers Gut Oggau and Christian Tschida in the Burgenland region and Michael Gindl in the Niederösterreich region. Although we know their wines well, there’s something magical about visiting them in person and seeing the entire process from the grape to the glass. 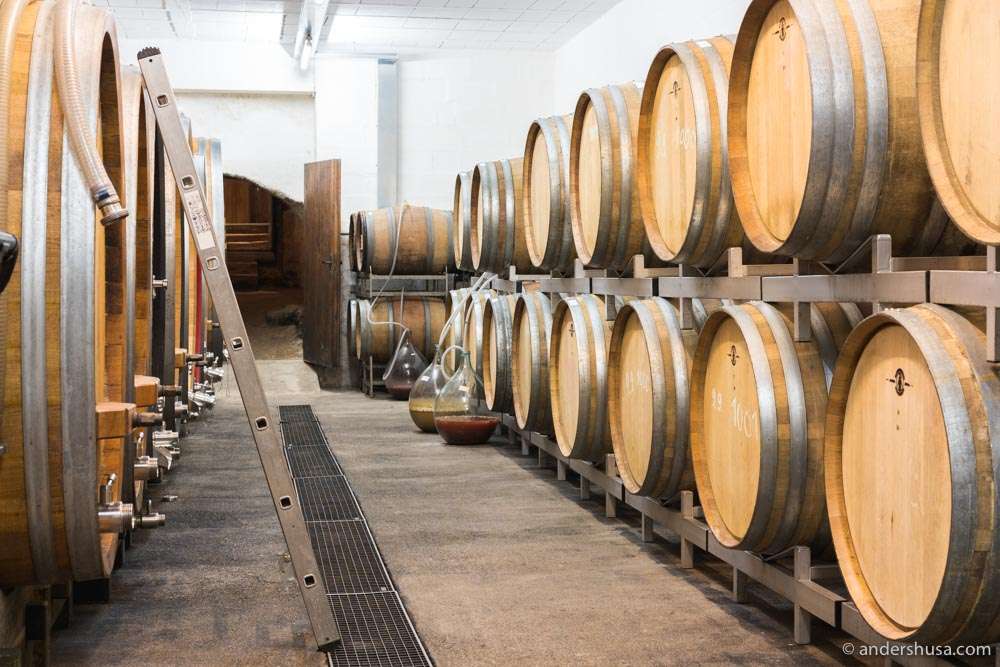 After drinking a magnum bottle of Winifred on New Year’s Eve, we started this year with a resolution of drinking Gut Oggau wine every day. (This resolution only lasted a week, but it’s the sentiment that counts.) The characters of Gut Oggau are like family to us, and we want to spend every day with them! But even my wildest dreams for 2019 couldn’t have foreseen us visiting Austria and meeting every member of the Gut Oggau family at this year’s harvest party. Dreams do come true!

Husband and wife duo Eduard and Stephanie Tscheppe-Eselböck welcomed us into their home for an incredible party, and also took us on a tour of their vineyards the next morning.

– What we do is much more than producing wine, it’s our way of life, and we want to share our life with you, says Eduard.

Kaitlin in the vineyard where the magic happens.

Gut Oggau, short for Weingut (winery) of Oggau (the region), follows a completely organic and biodynamic winemaking practice. They believe that this way of farming is good for the health of the planet as it gives more life to the soil, reduces carbon dioxide, and brings back harmony and energy to the plants. They don’t use any machines in the vineyards – everything is done by hand.

– What you do in the vineyards and how you grow the fruit is the most important. If the fruit is good, the wine will be good. We spend lots of time watching and feeling what the plants need, Eduard continues.

Burgenland is located in the hottest part of Austria, but cools down at night with a breeze from the nearby lake and winds from the Alps. Their soil is a mix of limestone and gravel. Gut Oggau produces 3000 kilos per hectare, which is about half what conventional wineries produce. This makes the wine slightly more expensive, but there are no additives, no preservatives, and no chemicals used.

– We always feel the next vintage is the best for us. That’s another year of biodynamic preparations, another year of learning and strengthening the plants. 2019 will be great, but the 20s will be even better, Eduard says with confidence.

Eduard giving us a taste of the 2019 Theodora.

You might be familiar with their eye-catching labels – each of their vineyards has such a distinct personality that they’ve developed a character for each wine. The oldest vines are the grandparents of the Gut Oggau family tree – Bertholdi and Mechthild. Their children, the parents, are a bit more mature, and the grandchildren are the lightest and most vibrant of the family tree. Theodora, for example, is a cheeky, playful, and rebellious girl. She might be more introverted or extroverted depending on the year, but her personality remains constant and recognizable.

Our personal favorites are still our main girls, Theodora (funky white) and Winifred (juicy rosé), but we also enjoy Timotheus (white, leaning towards orange) and Mechthild (stronger orange). In addition, the split face bottles (the white blend and the rosé blend) are amazing. Since 2016 was a bad year for Gut Oggau due to rough weather destroying a lot of the crops, they had to combine grapes from several vineyards, which they characterized with split faces on the labels. At the harvest party, we were fortunate to be able to taste most of the family alongside fried chicken sandwiches from Belle’s Hot Chicken. Australian founder Morgan McGlone is as crazy about the wines as we are, so he flew in for a harvest party pop-up. When there’s no fried chicken on site, Gut Oggau visitors can sample simple Austrian food from Gut Drauf, the restaurant and wine bar on property.

With over a decade of winemaking under their belt, and increasing popularity worldwide, Eduard and Stephanie want to keep their vinification process simple.

– The future for us is not to make a higher quantity of wine, but to keep the consistency and healthiness we have.

Morgan McGlone of Belle’s Hot Chicken was at the harvest party of Gut Oggau.

Kaitlin and her favorite girls.

While in Burgenland, we couldn’t resist the opportunity to visit another of our favorite producers: Christian Tschida. Christian is a neighbor (and friend!) of Gut Oggau, but he’s located on the other side of the lake (about an hour drive away) in Illmitz. Christian graciously invited us into his home to tour his cellar, taste some of his wines, and hear the story of how he started.

It’s no surprise Christian is such an expert in the field at a young age – he was born into the wine world.

– I was trained as a kid with my father in the vineyards to eat the grapes and tell my father how much sugar was in them.

His father, Fritz Tschida, was a winemaker with a similar philosophy and respect for nature.

– My philosophy came from my father’s – he was a green guy. I grew up caring for my plants, doing most things by hand, and not using pesticides. My philosophy became more focused and precise over the years.

Christian took over his father’s winery in 2003 with the dream of making a new kind of red Burgenland wine.

– I wanted to show the world that a strong, but super light red wine can work here.

We can only agree that he has succeeded, because, of all the Austrian red wines we’ve tasted, Tschida’s red wines are the lightest and juiciest.

Our favorite Tschida red wine is the Kapitel 1 (Chapter 1), which is vibrant and light, and has an incredible perfume of strawberry jam and flowers.

– It’s easy to make elegant red wine because of the tannins – you don’t need to over-extract. You can just leave it like a tea, in contact with the skins for six weeks, and you get delicate juice.

The white wine came four years later, in 2007, and the first vintage fermented on skins came in 2010, after experimenting for many years. Around this time, Christian moved into a new space and things really took off. He invested in big wooden barrels, and two extremely gentle presses, a vertical press, and a vacuum press, for the grapes. These presses don’t use any mechanical pressure; in fact, they have the maximum pressure of a handshake, so as not to bruise or shock the grapes.

Our favorite Tschida white wine is the Himmel Auf Erden (Heaven On Earth), which has notes of pear, aromatic flowers, basil, and thyme. We also love the orange and rosé wines in the Himmel Auf Erden series – they are extremely fresh, elegant, and vibrant on the palate.

– I am not only the winemaker, I am also the picker. I taste the grapes in the vineyard. I know everything that’s happening, every little aroma and flavor and how much acid is inside.

Christian produces wine from a single vineyard – it’s unfiltered and bottled as is, straight from the barrel.

– Years ago I stopped blending the wines, and now we only co-ferment the grapes. Nature will always do the blending better than me. It’s better not to mess with it.

Christian summed up his winemaking philosophy in a way that really resonated with us:

– You have to make your work visible. It doesn’t make sense if the carrots are treated the best in the garden if the chef can’t make that flavor visible on the plate. It’s the same with wine. How well we work in the vineyard only matters if you can feel it in the glass.

– I’m in a super fortunate position. I can make the wines I like, I can produce them in a super ethical and moral way. I’m very lucky and very happy.

Our Austria trip continued with a visit to Michael Gindl, who is making wine in the Niederösterreich region, about an hour outside of Vienna. We’d met Michael previously in Oslo and tasted several of his wines at many restaurants around Scandinavia, so we were excited to meet him at his farm and see his vineyards.

Michael was one of the winemakers at the forefront of the natural movement in Austria.

– My idea was to produce the best wine as natural as I could. When I started with natural wine, I was the only one doing it here in the region – everyone said I was crazy. Now, anyone can start making natural wine and everyone is interested.

He took over his father’s farm in 2002, when he was seventeen years old. In 2010, he brought animals back and turned the farm completely biodynamic. On his farm, he has horses, sheep, and goats, and he keeps Scottish highland cattle on his vineyards to enrich the soil with their manure.

Michael focused on skin contact in the beginning, which he says was largely because the grapes were not good enough on their own and needed the tannins and lees to stabilize the wine. Now he is doing less and less skin contact because every year the juice is much better. In the coming years, he says he wants to focus more on the soil and on old grape varieties, to honor Austrian traditions. In the same old-fashioned style, he is also moving away from tractors and wants to do everything on the vineyards with his horses.

– When you first start making wine, the wines are out of balance and the wines are freaky – it takes time. But if you put in the time, and do a good job in this way, the taste of the grape variety and the soil comes back in the wine. I don’t want people to taste my wine and say, ‘Oh this is natural.’ I want them to say, ‘Oh this is a good wine, without any sulfur.’

Michael Gindl in one of his vineyards.

As you might have guessed from the pictures on the labels, a lot of his wines are named after the animals on his farm. There’s Bessie and Bubbles (two of his cattle), Somalis (his horse), and Buteo, a bird that is wild and free like his wines. Our favorite of Michael’s wines, however, is Flora – a tart, acidic, and, you guessed it, floral wine with a painted label depicting what spring looks like this on his vineyard.

Which Austrian wine producers should we visit next time?