Restaurant 1877 is a semi-fine dining eatery in Bergen that offers a seasonal and modern five-course tasting menu with roots in Norwegian traditions. Some of the most passionate and skilled chef apprentices to come out of Bergen in recent time has served their trainee years here under the leadership of head chef Christer Økland. Simon Nilsen is one of them – a young chef who hosted several high-end pop-up meals during his time as an apprentice here. Together with colleague Stian Holme, he carried out his NOMNK-project a total of four times, with strong support from the leadership at 1877. Chef Økland also works in close relationship with local farmers and other suppliers. Indeed, Økland’s connection to passionate people seems to be his main driving force, which also makes for a great cooking philosophy.

Looking for more great spots for food and drinks in Norway’s second capital? Check out our city map of Bergen.

Restaurant 1877 was opened in 2013 by Christer Økland and his wife Ragnhild Børven, located just below the tourist attraction Fløibanen in the venerable Kjøttbasaren (meat bazaar) which dates back to 1876. You may like or dislike the eclectic and rustic interior design of this place, with all its portraits on the wall and little artifacts placed everywhere, but it sure transports you back in time. Old wooden panels, exposed brick walls, various brass-colored items, and wrought iron details wherever your eyes wander. Thank goodness, the food has a modern touch to it, at least. The five-course menu priced at NOK 795 is the top seller, but you can also opt for the smaller and slightly less pricey three-course meal (NOK 695). Although, with that pricing strategy, it really doesn’t seem like the restaurant wants you to do so.

When chefs and waiters come to your table, they speak with passion and knowledge about the dish they are serving, presenting its ingredients, as well as the farmers who produce them. “We got our goat kid from Evelyn at Gullbrå”, is typically what you’ll hear before the chef continues to explain how they’ve utilized the whole animal to keep it sustainable as well as cost-efficient. Wines are presented in a similar manner, but you can sense that the food is more local and closer to their heart. Which makes sense, when you consider that Økland takes his team on regular visits to the farmers with whom they cooperate.

The meal kicked off with two small starters. Haddock ceviche marinated in cucumber, lemon, and horseradish juice with cucumber pearls, cream cheese, and nasturtium was probably the weaker of the two. Serving it on a salt rock looked cool, but added excessive amounts of salt to the tiny bite, which had also been soaked too long in lemon juice. A crunchy pork crackling filled with smoked cream, raw apples, mahogany clams and topped with chives powder was a much better idea.

The sourdough bread at 1877 did not impress me either, but the fact that they seem to have baked it as baguettes and cut it in tiny slices probably added to the displeasure (I prefer more bread and less crust). Luckily, that concludes most of the complaints I had about my meal here. The following dish was lovely, served in a Rocky bowl from Odd Standard. Raw shrimps from Århus came with a fresh cheese from Bente Getz‘ dairy farm Guleiksgården in Samnanger, tomatoes from Hanasand, and a shellfish broth with shrimp and fennel. On top lay a crispbread with seaweed dotted with yogurt from the same dairy farmer.

The fish main course followed. Hake, with the lovely local name “Svartkjeft” which translates to black mouth, was cooked to flaky perfection. 1877 served it with cabbage grilled with browned butter, sauerkraut, turnip purée, and a sauce of buttermilk intentionally split with dill oil. Before the meat main course came my favorite dish of the meal. A 65°C egg, with butter espuma, elderflower vinegar, asparagus from Hvasser, and sourdough frites. Fatty, rich, and pop-in-the-mouth textures that left me craving more. Luckily for me, the waiter forgot to bring my drink pairing for this dish, so the kitchen decided to send out one extra plate so that I could taste how well it played together with the cider.

Goat kid from the farmer Evelyn Gullbrå was stuffed with ramson and baked at 64°C, and came with a side of parsley root purée, potato gnocchis with ramson, spring onions, and a goat jus with ramson oil.  Just in case you wondered if the ramson trend had faded. The goat meat was as tender as it gets, although it had a slight off-taste of goat, but not more than the condiments could cover up. Simon Nilsen was generous enough to pour the sauces slow enough for my camera to capture a focused image. Thanks, chef!

Dessert came in three servings. First, a palate cleanser which has become a tradition at restaurant 1877. A glass of red juice is placed in front of you, without the ingredients being revealed. You’re told to guess the three main flavors. I’m terrible at games like this, but I believe I had seabuckthorn correct, at least. The other two were raspberry and mint. The main dessert was strawberries and raspberries from Frekkhaug, with almond crumble, liquorice foam, yogurt sorbet and a sauce of strawberries. This was back in late May last year, which is a bit early season for strawberries. I guess, thanks to global warming! The kitchen team had managed to get the maximum amount of sweetness out of the little red devils anyway.

My meal ended with coffee served from an old-school brass-colored (of course) pot and three petits fours – choux pastry filled with chocolate & olive cream, almond financier, and raspberry marshmallow. Restaurant 1877 is a safe choice if you want a decent and traditional meal in Bergen, made with high-quality ingredients and founded on an up-to-date food philosophy.

My Second Visit to Restaurant 1877

A couple of months later, I was back in Bergen again and had to bring some fellow food writers to Restaurant 1877. The meal was even better this time, with stronger starters and some truly wonderful seafood. 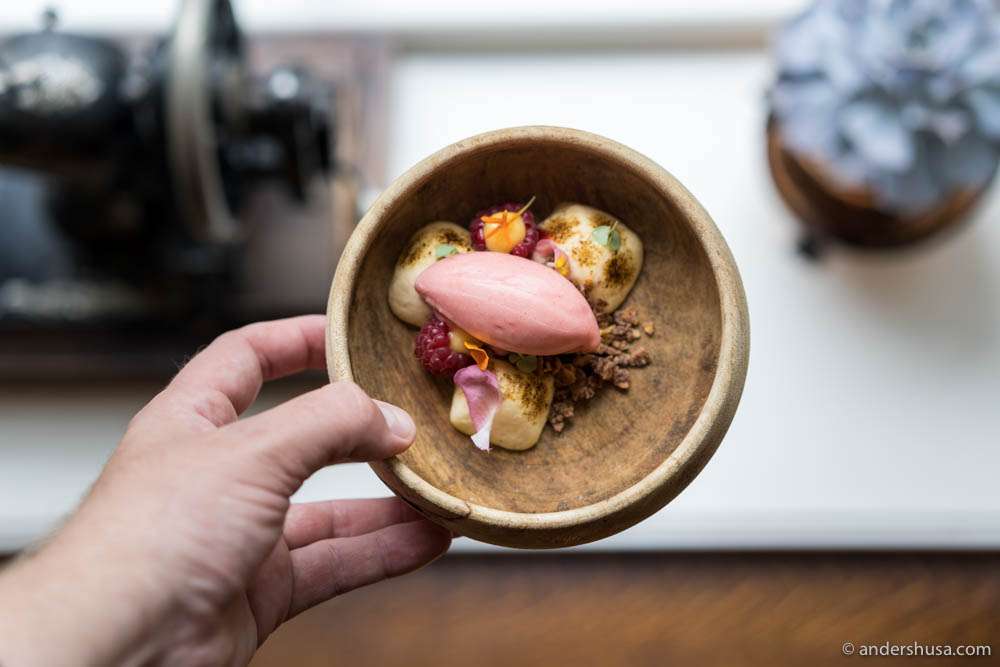 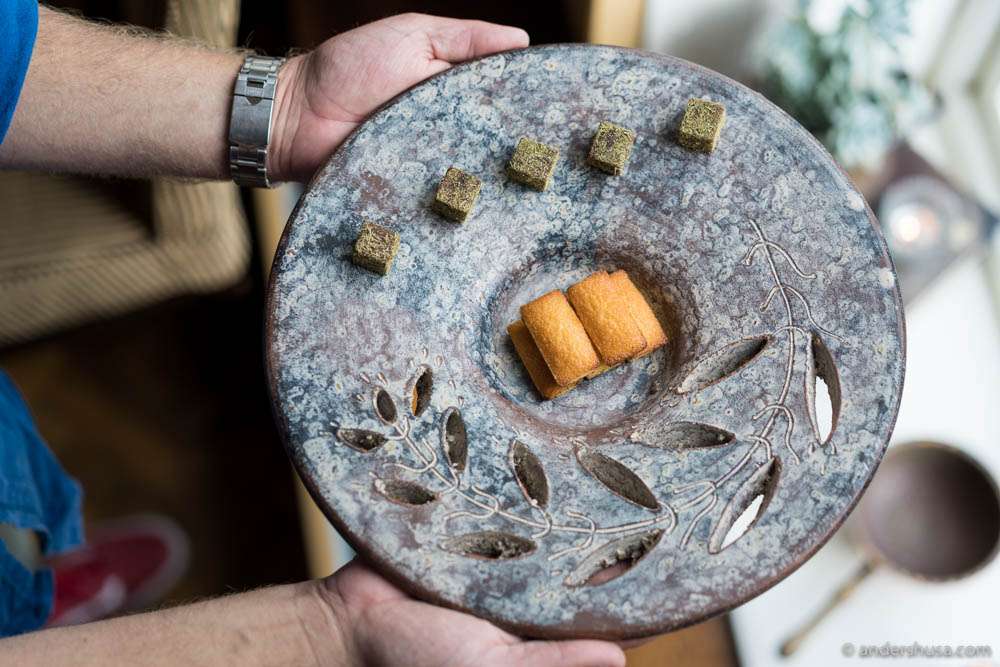 What’s your favorite restaurant in Bergen? Please leave a comment below.

This was part of a sponsored trip by Visit Bergen. The sponsor had no influence on the content of this article. I received no monetary payment.