The former space of Manfreds (Christian Puglisi’s neighborhood restaurant) won’t sit empty for long – a new restaurant is set to open in the space on Jægersborggade as soon as Copenhagen’s second lockdown ends this spring. Silberbauers Bistro will be a French bistro with a focus on seafood from Danish chef Mathias Silberbauer (with a background from Relæ and Bæst in Copenhagen, The Clove Club in London, and Pure & V in Nice). Despite his Michelin-starred fine dining background, Silberbauer is going more casual with his new concept. We sat down for an interview with Silberbauer to get all the details about his new project. Expect to find traditional Niçoise dishes like barbajuan and pissaladiere, and natural wines.

From Pop-Up to Permanent Location

Danish chef Mathias Silberbauer spent the summer of 2020 on the cobbled street of Jægersborggade in the former Relæ space while Christian Puglisi and his team had a pop-up restaurant on a farm in Tisvilde. Now, less than a year later, Silberbauer is getting a permanent location on this iconic street in Nørrebro. But the story goes back even further than that – Manfreds was actually the restaurant that launched Silberbauer’s cooking career, where he had his first job as a student ten years ago. Silberbauer spent many years working as a chef at Christian Puglisi’s restaurants (Manfreds, Bæst, and Relæ). Then he moved to London and worked at The Clove Club for a year, before moving to Nice and opening Pure & V (where he received a Michelin star). Now, Silberbauer is back in his hometown and opening a restaurant on his favorite street in Copenhagen.

Manfreds was an iconic Copenhagen restaurant for the last decade. It’s hard to imagine, but the now charming street of Jægersborggade wasn’t much of a destination ten years ago – at least not until Puglisi moved onto the street. What started as a neighborhood restaurant in Nørrebro (and one of the first places to push natural wine in the city, with legends like Solfinn popping the bottles), quickly became a popular tourist attraction for foodies admiring Puglisi’s passion for sustainability in the restaurant industry. When Puglisi announced he would close both Manfreds and Relæ at the end of 2020, fans were devastated.

Luckily, food lovers don’t have to be sad for too long – Puglisi is passing the space on to the next generation. Silberbauer was already looking to open in the Nørrebro neighborhood, so when Puglisi reached out and asked if he was interested in using the space it seemed like the perfect opportunity. Indeed, Silberbauer has big shoes to fill, but instead of trying to emulate the success of Manfreds, he plans to do his own thing at this historic address.

When we asked him how it felt to be taking over the iconic space, Silberbauer said, “I think it will be both an advantage and a challenge. It’s a great location with great history – also for me personally, since it’s where I had my first job as a student. I’ve come full circle, it’s a nice feeling.” In the end, Manfreds had become a place more for tourists than for locals, and Silberbauer hopes to bring the space back to its original role as a neighborhood restaurant, a place you can return to often. Don’t come here looking for the famous beef tartare (although, rumor has it you might still be able to find that on the menu at Mirabelle and Bæst) – come for a laidback and delicious dining experience with fresh energy. 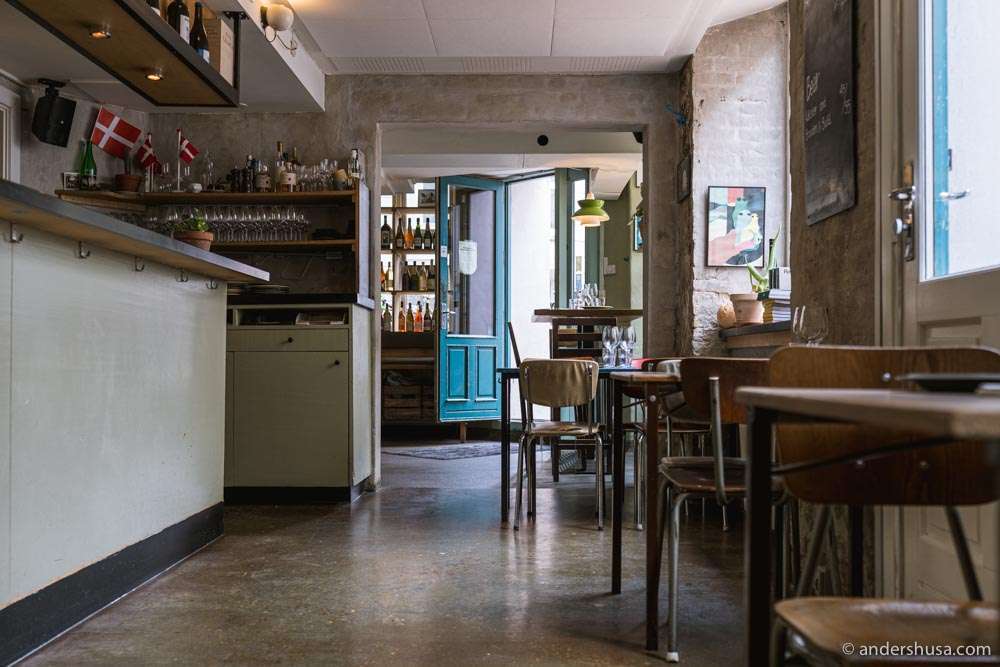 On The Menu at Silberbauers Bistro

Although Mathias Silberbauer earned a Michelin star at the restaurant Pure & V in Nice, the style of food he will be serving at Silberbauers Bistro will be inspired more by what he ate in France than what he was cooking there. It will be only á la carte (no tasting menus), and the style will be quite rustic without any fancy plating. The focus will be on the product – everything will be organic, and most of the menu will be based on local Danish seafood sourced from Blue Lobster and Fiskerikajen.

The seasonal menu will change often and will be handwritten by Silberbauer on a blackboard each day, with dishes crossed out when they’re sold out. You can expect a few signatures – there will always be some kind of flat fish cooked with butter and served with potatoes and capers, and there will always be something with mussels. There will also be a few classic French dishes like the Niçoise specialty barbajuan (deep-fried Swiss chard and ricotta ravioli) and pissaladiere (onion tart with olives). Lots of the seafood dishes will be cooked simply on the plancha, Mediterranean-style, like on the Amalfi coast or in Spain. (Think grilled squid with garlic, or langoustines cooked in the shell and served with ramson butter.)

The menu will change with the season, leaning a little heartier in the cold winter months, and serving lighter fare and more vegetables in the summer. Silberbauer will still work closely with Puglisi’s Farm of Ideas, but instead of serving the Nordic-style veggie dishes you can find everywhere in Copenhagen, comfort dishes like deep-fried courgettes. There might be one meat dish on the menu, like a daily special of roasted sausage with mustard and lentils, but the rest will primarily be fish. The exception to this will be on Sundays, when Silberbauer hopes to offer a Sunday roast with a set menu: three starters to share and a roast, perhaps a leg of lamb, roast chicken or duck, or a pot-roasted ham. For dessert, you might find French classics like a lemon tart, clafoutis, or even tarte tatin.

Silberbauer’s goal is to keep costs low by only hiring a small team (one front of house and one other chef in the kitchen) and making the guests do more of the work themselves. They’ll serve fish whole on the bone, for example, or in the shell for guests to crack open themselves. Similarly, the staff will drop off wine bottles at the tables and let guests pour the wine for themselves. Silberbauer also plans to buy specialties like lumpfish roe and crayfish only at the end of each season when prices are cheapest, to keep prices affordable. All starters will be around 75 kroner and the mains will be in the 200 kroner price range.

The wine list at Silberbauers Bistro will be all natural, but perhaps a little less funky and more approachable compared to the selection previously offered at Manfreds. Like the food, the style will be mostly French – clear Burgundy whites with a bit of age, juicy reds, whites from Alsace, and some Austrian and German producers as well. The list will start small, mostly from Silberbauer’s own cellar, with more bottles and less on offer by the glass. The goal is to keep the prices low on wine as well as food, encouraging guests to lean away from the by the glass options and buy a good bottle of wine for less. For those who prefer more conventional wine, they will also offer some whites that are technically natural but quite classic in taste. The style will be unpretentious, with easy-to-drink, enjoyable bottles – they care less about the grape and more about how it tastes. They might even serve boxed wine in carafes outside on the terrace for those who really want a cheap fix.

Copenhagen Meets the South of France

“This style of restaurant is very popular in Southern Europe, but I don’t know where to find someplace like this in Copenhagen,” Silberbauer said when describing the vibe of the restaurant. With his food, red and white checkered tablecloths, and fun disco playlist, Silberbauer hopes to transport you to the south of France. The goal is to run a neighborhood bistro that’s packed every day of the week, whether it’s a Wednesday or a Saturday. “The style of going out in France is more about the vibe and conversation around the table.” Silberbauer pointed out. “This is why we want to have a very relaxed service, with less people plating and more people dropping stuff on your tables. The food and wine is gonna be good, and I want to create a nice vibe, but the rest is up to the guests,” he added with a smile.

Opening a Restaurant During a Pandemic

For those craving a getaway to the south of France, good news – it might be closer than you think. No, we still won’t be able to travel for a while, but Silberbauers Bistro is set to open as soon as the restaurant restrictions are lifted in Copenhagen. Whether that will be on the first of March (unlikely) or Easter (more likely), Silberbauer is ready to go. We asked him what it was like to open a new restaurant during a pandemic and he said, “I’m excited to bring something brand new, some fresh energy to the city!” Even in this crazy year, new things are still opening in Copenhagen.

Silberbauers Bistro will start by opening Wednesday through Saturday for dinner (and Saturday lunch) and hopes to expand to six days a week (Tuesday – Sunday) if things go well. “We’re starting small and tight and will open slowly as we go,” Silberbauer commented. Future plans for Silberbauer could also include opening a French butchery in the space that was formerly used as a food lab and office for Relæ. Silberbauer would love to sell cuts of meat, baguettes, and terrines in a deli space next door. But, for now, the focus is just on getting open.

“I’ve been dreaming about this and working towards this for three years. I’m ready to go!”

Are you looking forward to visiting Silberbauers Bistro? Leave a comment below!